How Much are You Actually Overpaying Your Core IT and Fintech Suppliers?

How much am I overpaying for core, IT, and fintech services?

It’s the most frequent question we’ve received since we started helping community banks and credit unions fight back against unfair vendor agreements over fourteen years ago.

Naturally, it’s a fair question to ask, but it’s impossible to provide a simple answer to such a complex financial question. Core banking agreements and fintech vendor contracts have so many nuances that it’s impossible to pinpoint the “right” price to pay for these services without hiring an expert armed with market intelligence to analyze your contract — there are just too many factors at play.

However, a few years ago, an independent 3rd party auditor ran analysis of our past contract negotiations to find answers. The results were flooring: 8 out of 10 contracts were anywhere from 13.1% to 43.1% above fair market value before the bankers requested our services.

How do 80% of vendor contracts wind up being so much higher than the market? It’s because core IT providers and vendors force ill-equipped bankers to unknowingly agree to vastly unfavorable deals.  Bankers just don't possess the national pricing data to know if a line item should be $.01 or $.10.  They also don't understand how pricing should change as bank assets, transactions and accounts grow.  Vendors don't volunteer to make your pricing more efficient - you have to know what to ask for and be prepared to prove the ask.

6 Manipulative Strategies That Suppliers Use to Make You Overspend

Unfortunately, the core IT oligopoly — Jack Henry, FIS, and Fiserv — have gamed the system for decades. These companies make hundreds of millions of dollars off of predatory agreements every year by exploiting the limited resources of smaller institutions. While new fintech vendors don’t have the same history and capital behind them, they do have the technical expertise to use the same manipulative strategies to make you overspend on your contract.

Here are six strategies these suppliers use to trick banks into overspending by millions of dollars every year.

It’s the oldest trick in the book. Vendors have a distinct advantage over smaller financial institutions: data. They work with hundreds if not thousands of other clients, depending on the vendor. They know what’s truly a discount and what’s a ruse to make more money. They’ll offer economic concessions that still result in deals that are exceedingly above market rates.

The typical banker may push for a slight bump — say 2.5% to 10.0% — when, in reality, their deal could have been 25% above market in the first place. This cycle continues with each renewal, and the vendors continue to squeeze money out of disadvantaged institutions.   Remember, vendors make banks agree to increase the price annually through prescribed kickers tied to inflation (CPI, ECI, etc).  The compounding effect of annual increases erases a 5% or 10% discount as a bank grows organically.

We see exclusivity clauses in almost every single vendor agreement — we’re willing to bet it’s in yours too. It places an inordinate burden on smaller institutions from both financial and time perspectives. The exclusivity clause empowers your vendor with control over not only your data but also who you do business with.

If you want to switch to a new fintech supplier, your core IT provider has to okay that service. You have to jump through their hoops and abide by their schedule. If you want to get out of this agreement, you’ll have to pay a termination expense, which is often between 80% and 100% of your contract’s remaining value. Unfortunately, many bankers wind up paying out a supplier for services they never see.   The cost of exit winds up erasing the economic benefits of switching to a new fintech supplier.  Vendors monetize the fintech evolution this way. 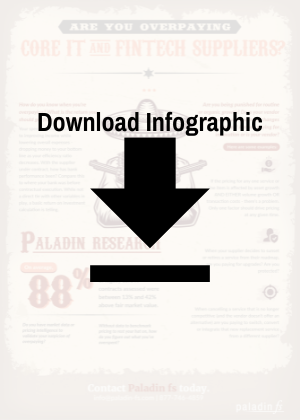 Like exclusivity clauses, conversion expenses are a common technique used by vendors to profit off of your business. Conversion expenses are particularly damaging when banks acquire or merge with other institutions. Consolidation isn’t uncommon in the financial services industry, and vendors know they can make massive profits off of these transactions without lifting a finger.

We’ll walk through an all-too-common example. Let’s assume your bank acquires a smaller institution. Your institution enlists the services of FIS, while the acquired bank works with Jack Henry. So, you’re helping FIS out by bringing them more account activity and revenue from competitor Jack Henry. However, even though you’re technically bringing the provider new business and helping them gain market share, most agreements have predatory and restrictive acquisition clauses that force you to pay the provider a conversion expense for converting and normalizing the acquired institution’s data. Depending on the size of the deal, this illogical fee could cost you hundreds of thousands if not millions of dollars.  Vendors should be sharing the spoils of their growth they gain with your bank - not demanding you double down and pay them again.

The blend-and-extend strategy is a variant of the discount illusion. When banks try to push for lower prices, core IT providers and fintech vendors often agree to the economic concession in exchange for an extended contract. A vendor may offer you a percentage discount if you extend your current maturity by a certain number of years.

This is usually a double-whammy. As we mentioned above, vendors rarely concede to fair market rates — they offer fractional compromises that still lock-in hefty margins. On top of overpaying, now you’re stuck in a longer contract.

Let’s walk through an example. A bank adamantly pushes for a pricing discount on a particular service, which it’s historically paid $75,000 for. Using the blend-and-extend tactic, the vendor would offer $50,000 so long as the bank extends the existing three-year agreement by another three years. While that seems like a win, little did the bank know that the market rate for the service is $10,000. Now they’re stuck.  Viewed differently, the bank received a 30% discount in price in exchange for a 100% extension in time.  Bankers that go it alone tend to find themselves in this trap.

Once a master agreement is reached, vendors trap banks and credit unions into seemingly endless contracts by up-selling and cross-selling additional products and services with varying maturities. By staggering the maturity dates of these ancillary offerings, your institution loses leverage and enters a cycle of unfavorable renewals.

That’s why we tell our clients to demand coterminous agreements. Otherwise, your vendor maintains a negotiation advantage indefinitely, forcing you to pay more than you should.   Vendors will try to penalize you for shorter terms but that isn't necessary or appropriate in most instances.

Yes, you read that correctly — service level objectives (SLOs) differ from service level agreements (SLAs). SLAs are commitments to perform a certain level of service. Conversely, SLOs don’t obligate the supplier to maintain service performance standards. They’re just dressed up to appear like they do.

While these aren’t direct, explicit expenses, there is a business cost to not having proper SLAs. SLAs should mandate that a supplier pays you a credit in the event they don’t meet predetermined expectations known as a "miss".  Even if that financial credit for the miss is small, it still incentivizes the provider to address and fix the issue. On the other hand, under SLOs, the supplier makes a subjective promise to perform — commonly known as a “best effort.” If the supplier fails to do so, they can point at your agreement and say, “You aren’t entitled to compensation.” Since they aren’t incentivized to address the problem, you have to scratch and claw just to resolve the issue and then gain any compensation if you are harmed.

In addition to excessively high prices, the aforementioned study also found that 99% of contracts have critical business and legal term defects. All of these issues trace back to a key and common problem: negotiating without data. Core IT providers and fintech suppliers make a living off of data. Community financial institutions don’t have the same advantage, which leads to negotiation mistakes and costly contracts.

Data is a pivotal difference-maker. You can leverage data to create an attack plan and negotiation strategy.

We’re armed to the teeth with data and negotiation experts who have decades of experience in the core banking space. That’s how we’ve helped the industry by returning more than $500 million and individual institutions save $1.38 million on their contracts on average. Regardless of cost savings, there’s always something that can be improved.

Vendors won’t volunteer discounts and more favorable terms — you have to demand them.

Connect with us to see how we can help you stop overpaying for your contracts. 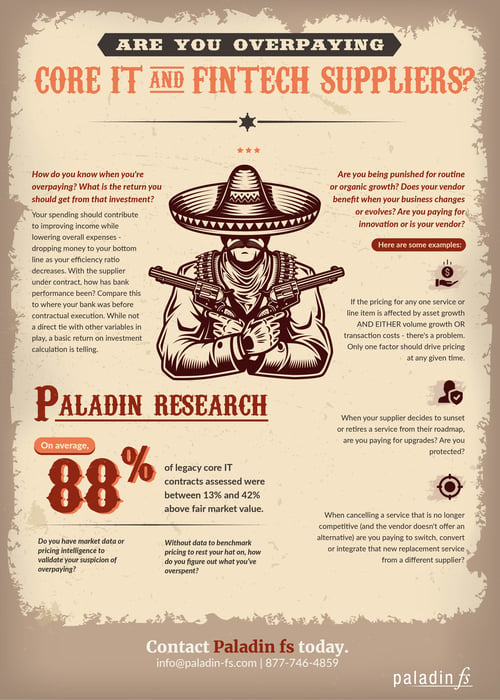