This Month In Banking: Discussing The Future Of Open Banking 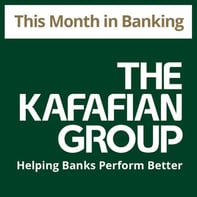 Paladin's CEO, Aaron Silva, recently had the pleasure of appearing on the This Month In Banking podcast by The Kafafian Group. Aaron and the hosts - Sharon J. Lorman, Jeffrey P. Marsico, and Gregg J. Wagner - discussed what the future of banking looks like, industry issues with the Big Three core providers, and the relationship between the two.

Here's a quick rundown of some of the topics they covered:

Open banking is when a bank implements technology like APIs that allow other banks, financial institutions, and third-party service providers to easily access information from one another. Things like working with other institutions, core providers, and offering new services to customers would essentially be plug-and-play. One of the major challenges facing open banking is the outdated technology that legacy FinTechs are using. When most of these businesses were started, the concept of open banking didn't even exist, so open banking practices are primarily being used by newer FinTech suppliers.

APIS AND HOW THEY AFFECT COMMUNITY BANKS

An API (Application Programming Interface) is a set of programming structures that allows different applications to work seamlessly with one another. A helpful way to think about APIs is as a set of doorways. Behind every door is a set of data that other financial institutions might need access to - like an app that connects to a person's bank account to help them budget. APIs compartmentalize a bank's data, only giving third parties access to the data they need in a fast, efficient, and secure manner

Paladin's vision for the future of banking platforms is a democratic one, a cloud-based community core funded by an industry token (crypto). This system would put the power of core providers in the hands of the banks, who would then be able to develop them in a way that aligns with their vision.

WHAT ARE THE TOP 3 MISTAKES BANKS MAKE WHEN NEGOTIATING?