Why Switching Sides Was The Best Career Move I Ever Made

My name is Bill and I spent the last 10 years employed for one of the “big three” providers of core software for community financial institutions in the United States.  A re-read of that previous line aloud almost sounds like I’m part of a 12-step program.  Six months now after leaving and switching sides to a consulting firm that professionally negotiates for banks against my previous employer - has been sobering for sure.

Before joining Paladin fs I had installed, implemented and trained banks on the use of core software.  I presented core solutions to banks and credit unions, user groups and during conventions all over the country.  I spent the last five years working as a Client Partner serving banks in a designated midwest territory.  I am proud of this time dedicated to serving financial institutions on behalf of that core provider and I worked with some really great people.  However, I worked under the belief that my company was an advocate for the community bank and were striving to be good “partners”..  I am not so sure anymore. 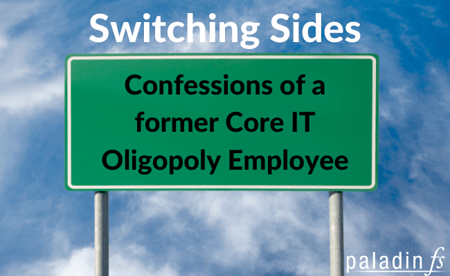 What I learned in this last half-year was I wasn’t an advocate for financial institutions after all.  I found myself often explaining “surprise fees” to banking clients for forced upgrades necessary to accommodate a new regulation passed by congress - when it should have been absorbed by the supplier.  Non-stop billing inconsistencies that usually favored the vendor if overlooked or have the internal fight to get a credit issued back to the client if the mistake was on the vendor. I was asked to up-sell software previously purchased by my client because we acquired a new fintech and decided to change the direction of the originally purchased platform.  I had to explain to my client that the software just purchased was now going to cost them significantly more each month because we decided to upgrade to a different product?  I was always caught in the middle, trying to be an advocate for the bank while working in the best interest of my company .  It was grueling and most often unfair, many times unethical.

I was also tasked in negotiating renewals with my clients.  I negotiated as many as  six (6)  deals a year.  My team of client partners negotiates about the same number of renewals each year as well.  Client Partners would work with an inside team to negotiate these deals to finality.  Between my leader, his boss, finance, legal and other business units, we could have as many as a dozen eyes on a particular deal.  We all had one goal, to maximize profit for the life of the new agreement.  I would listen and negotiate with the bank, provide credits that would provide some relief, but we always hit our target at the end of the deal.  Bankers were always out-gunned but never knew what they were leaving on the table.  We did.

The core provider had a team dedicated to this process, but my clients usually had only a small internal team, maybe house counsel or an outside attorney to review and negotiate the deal but they didn’t add much to the process at the end of the day.  While the banks focused on pricing, we would focus on other key items like terms and conditions and improved SLA’s that benefitted us to the bank’s exclusion.   With 100 plus page agreements being negotiated, it was too much for the bank to comprehend and negotiate effectively.  Most often my banking clients would discover surprises after the agreements were signed reminding me of the famous quote, “We have to pass the bill so that you can find out what is in it”.

Thankfully, with all the strife of 2020, my career brought me to Paladin.  I can now truly be an advocate for my banks and credit unions at Paladin.  My conscience is clear.  I can work for financial institutions and fight surprise billing, unnecessary gouging for conversions and or involuntary service changes made by the vendor that ultimately  strengthens the new agreement for the financial institution, not the vendor.  Paladin’s approach counterbalances the team of folks the core providers utilize to negotiate renewals, software upgrades, integration with fintechs, etc.  Paladin becomes an extension of the bank’s intelligence and general understanding in these complex negotiations that are critical to negotiate against any of the “The Big Three”.