5 Ways The Paladin Bluebook™ Can Help Save You Millions

Many banks and credit unions face a growing dilemma: their core banking systems are outdated, complex, and inefficient.

When your core banking system predates the commercialization of the internet (circa 1992) — that’s a problem, don’t you think?

Prior to the expansion of financial technology, designing digital services (account processing, internet banking, bill payment, etc.) was too large of an undertaking and investment for most institutions in terms of time, resources, and capital. Bankers want to be bankers, not technology startups. Instead, most banks elected to continue to purchase from legacy platforms offered by companies like Fiserv, FIS, and Jack Henry.

Today, many FinTech companies are changing the landscape; digital banking is not only accessible, but it’s also becoming the precedent. That said, until a cloud-based core FinTech solution surfaces and obsoletes legacy core technology stacks, you have some major hurdles to overcome and hoops to jump through — because that’s the way the legacy providers want it.

Thanks to the Paladin Bluebook, we can help you avoid these hurdles and hoops — whether you’re upgrading part of your technology stack to an alternative FinTech vendor or still working with a legacy system.

What Is the Paladin Bluebook?

The Paladin Bluebook is an asset that we’ve invented and used to help our clients win their core and ancillary banking vendor negotiations since 2009. It’s a structured knowledge base that constantly maintains five to seven years of market intelligence, including specific terms and conditions from completed contracts, deal negotiations, ancillary research, and thousands of line items of vendors’ service prices coast to coast. It’s a private and unparalleled database maintained by the Paladin team.

The database makes dynamic recommendations based on the size of our banking client, the vendor, and the core banking or fintech system they are using (or planning to purchase). These recommendations expose areas of the contract that could require modifications, additions, or deletions. This establishes a baseline for the Paladin team, arming our experienced negotiators with an opening strategy and attack plan. From there, we can tailor the negotiation to our client’s specific preferences and strategic needs.

With that understanding, let’s walk through five ways the Paladin Bluebook helps community banks and credit unions recapture more than $500,000,000 in its history. 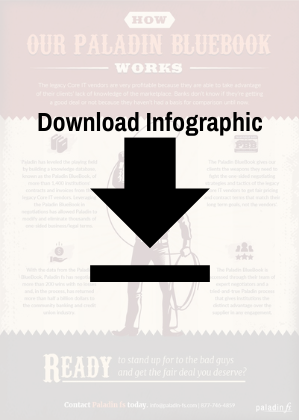 We aren’t new around these parts. We’ve helped negotiate hundreds of deals and examined thousands of contracts and invoices, so we’ve built a reputation in the financial services industry. Vendors know who we are — a team of former core and IT vendor execs — and what we bring to the table — a database of influential information that can expose predatory terms and unfair costs without debate.

In other words, Vendors know about our team’s industry expertise, knowledge base, and negotiation capabilities. So, they stop playing games when we get involved because they know they can’t sneak in terms.

When a vendor knows you have access to private market data, their attitude and negotiation strategy changes. You immediately gain an advantage.

#2: We Level the Playing Field

Let’s put it this way: the Paladin Bluebook is a one-of-a-kind asset. No one else has access to such pivotal, negotiation-shifting information. That includes core banking system providers (like Jack Henry, Fiserv, and FIS), banks, credit unions, and even other consulting companies.

Yes, there are other consulting companies that help negotiate contracts. And, yes, they too have may experienced consultants that can get select terms rebalanced in your favor. However, their databases aren’t nearly as robust or expansive. In turn, their negotiation strategies aren’t as comprehensive and the final deal isn’t as favorable.

In short, the Paladin Bluebook levels the entire playing field so that vendors don’t pull any fast ones during contract negotiations.

#3: Every Deal Gets Better Than the Last

Since the Paladin Bluebook is constantly adapting to new deals and market information, every deal gets better than the last. The benefit compounds as our contract negotiation data accumulates. A bank that leverages this tool in June 2021 has insights and advantages that didn’t exist a year ago.

Let’s say a particular community bank works with Jack Henry, and the bank hires us to help them negotiate their next contract. First, the Paladin Bluebook enables us to see what banks of similar size typically pay Jack Henry for core banking services. Next, we can also see what banks in the same city or region pay other core banking system providers. For instance, what is a bank down the street paying Fiserv for the exact same service? We can triangulate the relevant prices and understand market benchmarks for both prices and contract terms.

In turn, we’ve gained leverage in our contract negotiation with Jack Henry. If Jack Henry says they can’t budge on a particular price or term, we can point to Fiserv and say, “Well, your competitor does.”

We see a lot of community banks and credit unions negotiate without the support of data. The process is sluggish and the end result isn’t pretty.

Here’s a typical example. When the financial institution asks for a pricing discount, the vendor throws out a number like 5%. The bank counters with 10%, which usually leads to a mutual agreement at 7.5%. As simple as this back and forth sounds, it often takes up to six months — but it still feels like a win for the bank because they managed to haggle another 2.5%. However, that’s far from the case. If the bank had the data to back up their negotiation, they’d know they could’ve secured a 24% discount for example.

If you negotiate without data, you’re just guessing. If you’re armed with data, you can secure the best terms and accelerate the negotiation process. When we started using the Paladin Bluebook in 2009, it took several days to research and audit contracts and invoices. Today, we can generate market intelligence for a deal in a few hours, unlocking both time and cost efficiencies.

Core banking contracts are typically five- to seven-year agreements. It’s impossible to see that far ahead — especially in today’s ever-changing market. How are you supposed to foresee a financial obligation that hasn’t even taken shape yet?

Yet, we see a lot of core banking system contracts exploit this unpredictability with restrictive terms around acquisitions. For instance, your contract with Jack Henry may have a clause stipulating that your bank must pay a $500,000 conversion fee if it acquires another institution during the term of your agreement. The idea is that this fee covers the onboarding and conversion process of the newly acquired bank’s data. Needless to say, that’s illogical.

Backed by the Paladin Bluebook, we’re able to not only eliminate these fees but also institute a new clause called gain sharing. Under this clause, if your bank acquires another institution that receives core banking services from a competitor, the incumbent vendor will compensate the bank because you’re bringing in new business (not their sales team).

Using the previous example, why should your bank have to pay Jack Henry if it helped them secure a new account and additional revenue without Jack Henry having to spend a dollar? The fact is you shouldn’t.

Win Your Next Contract With Experience and Data

Want to take control of your contract and outmaneuver your core banking provider? We’ve helped hundreds of community financial institutions intelligently negotiate better core IT deals. Connect with us to learn more about the Paladin Bluebook and our contract negotiation techniques.