"Gather a group of community bankers and you'll quickly find their common ground: A bad experience with a core processor. Their complaints might focus on lack of responsiveness, steep conversion or deconversion fees, or brutal terms to terminate a contract early; whatever the problem, the result is frustration."

Our President, Aaron Silva, weighed in on the topic. 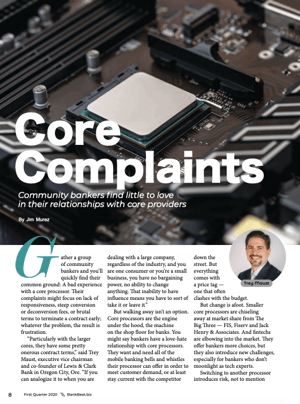 Community bankers are encouraged to hire consultants when it’s time to negotiate a core contract.
“It’s remarkable to me why a bank doesn’t get help on a multi- million-dollar contract,” said Aaron Silva, president and CEO of the Golden Contract Coalition and president of Paladin fs. “You just have to go in represented.”
Silva said bankers have little leverage on their own, and often lack knowledge about pricing. They can’t negotiate from a position of strength,” Silva said. The suppliers are hoping...