How To Be Smarter Than Your Core IT Vendor

Your Core IT vendor knows their stuff — and they should, it’s what you pay them for. However, when core banking providers exploit that knowledge during contract negotiations, it’s a problem.

Historically, Core IT vendors have nickeled and dimed community banks and credit unions with an arsenal of hidden fees and unfair terms. Unlike the major banks, these institutions don’t have the staffing or resources to counter vendors’ legal teams and IT expertise. The result: costly, one-sided contracts that heavily favor the vendors.

To combat unbalanced contracts and predatory terms, you have to outsmart your Core IT vendor, which isn’t as challenging as it may sound. How can you keep the experts honest? It starts with understanding your vendor and negotiation counter party.

Understand Who You’re Up Against 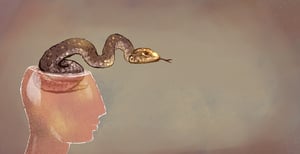 More likely than not, you’re working with one of the legacy Core IT oligopolies: FIS, Fiserv, or Jack Henry. These are multi-billion dollar companies with sizable holds of the financial services industry. As you can imagine, the ongoing financial technology (fintech) boom has massively benefitted this industry — except many community banks and credit unions have been left in the dust, and these core banking providers are largely responsible although they claim to be a big supporter of community banking market growth and success.

For starters, contrary to what their marketing materials tell you, the “Big Three” providers aren’t investing in innovation, at least not in the way you would think.

Despite the fact that FIS and Fiserv generate billions of dollars each year, they only allocate between 6% and 9% of revenue to product development. Jack Henry isn’t much lower at 3.15%. In comparison, the typical tech company in other industries would apply 18% to 22% to innovation spending in order to improve products and services on par with industry demand to remain competitive.

So, how do these core banking providers “innovate”? By acquiring smaller companies and pushing those services on community banks and credit unions, whether they’re relevant or not.

Companies like Jack Henry, Fiserv, and FIS gamed the fintech core banking system and make fortunes off of smaller financial institutions every year. How? By monetizing the fintech revolution — at your expense and with your data.

To even the playing field, you need to be aware of and understand their contractual tactics and hidden financial penalties.

WATCH 3 MIN VIDEO: How the Core IT Oligopoly is Monetizing the Fintech Revolution 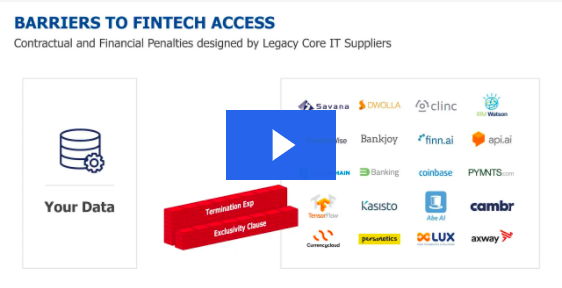 The Tactics Core IT Vendors Use To Deceive You

It’s your system. It’s your data. Ultimately, you should be in control.

However, the legacy Core IT vendors impose contractual barriers to limit your fintech access.

Think about it. If you want to use a particular fintech company’s software, the company needs to access your bank’s data. But granting access isn’t that simple, because your data is stored on your core banking provider’s servers. So, you have to consult and involve your provider first.

It’s an easy clause to overlook, especially since fintech core banking system contracts are lengthy documents. But this clause grants your core banking provider a lot of power over you and your data. The exclusivity clause allows your vendor to control how your business can pursue, engage, and receive a particular service. This level of control creates a series of costly, cascading expenses and hoops to jump through.

After you pay the termination expense, you’re on the hook for a de-conversion expense — the process of normalizing your data so that the new vendor can understand it.

Then you have to pay a conversion expense to have the fintech supplier convert your data into an understandable and usable format.

After that, you’re funneled back to your core banking provider, to whom you have to beg for access to your data through an API (Application Protocol Interface ore "Middleware"). This can cost hundreds of thousands of dollars. After you pay the API’s implementation expense, you still have to pay each time you access your data.   A CIO of a $23 Billion institution in Virginia referred to this as "paying for every drink you take of the very beverage you own!"

It’s a cyclical, cost-prohibitive process. Here’s a summary of the tactics core banking providers use to deceive you:

The good news is that you don’t have to lock yourself into a long-term, one-sided contract with predatory terms and pocket-emptying rates.

Because you have leverage.

You Have Leverage, Use It

The aforementioned tactics aren’t anything new — core banking providers have been using them for decades. These vendors would drop unfriendly “agreements” on bankers’ desks and essentially say, “Here’s your next contract.”

Last year was a perfect example. While community banks and credit unions struggled through the economic fallout of the pandemic, guess who raked in revenue? Fiserv, FIS, and Jack Henry.

Guess what was a major contributor to these financial windfalls? So-called “Pandemic Deals.” Even though contract maturity dates were years away, the Big Three sent their clients unsolicited contract renewals in an attempt to catch bankers flat-footed and corner them into long-term, multi-million dollar contracts.

During a time of unprecedented uncertainty, core banking providers strong-armed bankers into accepting. Based on our conversations with many of these bankers, they felt intimidated into “take-it-or-leave-it” deals. They didn’t think they had the leverage or resources to counter.

That’s not the case. You have leverage, you just have to know how to use it — and it starts at the negotiation table.

We’ve seen many bankers neglect or underestimate this critical phase. They hastily accept an economic concession because it’s the easy route. Your contract approaches its renewal date. Your core banking provider sends you an identical contract with a 5-15% monthly price discount. It seems like a good deal — plus, you have enough on your plate already — so you renew for another five years.

But this isn’t a good deal, it’s a mistake. The negotiation table is your opportunity to even the playing field, whether it’s a renewal or a new vendor relationship. This is the time to visit other areas of your contract. Otherwise, you’re locked into disadvantageous clauses, unfavorable SLA windows, and hidden costs embedded deep within the bowels of the deal.

When you sit down with a new or existing vendor, outline your bank’s plan for the next three to seven years. See if your supplier’s abilities mirror your plan and reinforce your bank’s strategy. Your contract should align with your strategy, not your vendor’s. Service levels, pricing, commercial terms, legal covenants, rights of termination, merger benefits — these contract elements should favor you from the beginning.

Unfortunately, most bankers come to us after they’ve agreed to a one-sided contract. 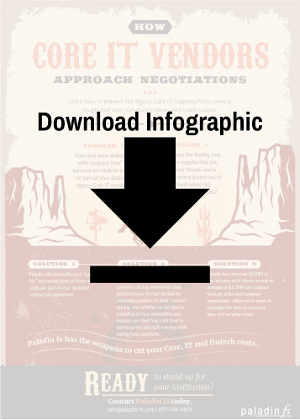 As a mix of former Core IT vendor executives, we know the space and the negotiating tactics that vendors use to position deals in their favor. We’ve researched thousands of contracts and collectively saved community banks and credit unions over one-half billion dollars since 2009. We even compiled a comprehensive knowledge base called the Paladin Blue Book, which contains pricing and market data from nearly a decade’s worth of deals.