The Importance of Timing in a Successful Negotiation Strategy

Legacy core providers and fintech vendors know what they’re doing. They know how to manipulate contract negotiations and renewals to their advantage. Historically, smaller institutions haven’t had the resources to combat their tactics. That’s changing.

Community banks and credit unions have leverage — they just have to know how and when to use it.

Timing is crucial to negotiation. It doesn’t matter if you’re going head-to-head with your core banking provider or a new fintech supplier; you must know when to enter negotiations if you want to secure the best deal for your firm.

Because the timing of your negotiation is the difference between the quick and the dead.

The 3 Phases of Negotiation Timing

The typical IT contract is five years long. During that term, you may encounter unfavorable terms that inhibit your organization’s ability to do business — many community institutions lack the resources or technical expertise to catch common predatory clauses at the onset. So, you make a note of these grievances and wait until your next contract renewal to raise your concerns. While the last year of your agreement may seem like the ideal time to start assessing your next contract, that would be a dire mistake.

If you want to push for better pricing or more favorable terms, you need to start far sooner than year five of your agreement.

You need time to gather enough intelligence to make an informed decision about your contract and whether you want a new supplier. The best time to commence this due diligence process is the “early bird” phase, which is when you have between 24 and 30 months remaining on your contract.

You may be thinking, “Really, two years? Why on earth would I start that soon?”

The negotiation process for core banking agreements and vendor contracts is lengthy; each step can take months. Digging through your contract to find areas of improvement, researching market rates and terms, opening negotiation with your current vendor, waiting for counteroffers — this could take anywhere from three to six months to complete.

By initiating the negotiation process in the early-bird phase, you set yourself up to sign your next agreement in the “sweet spot” — when there are 18 to 24 months remaining on your contract. Now, you have time to switch vendors and shop the market if you don’t like the proposed deal.

The worst time to start the negotiation process is what we call the “red zone,” which is when there are less than 18 months until your contract expires. As the months count down, you lose negotiating power — it shifts to your supplier. This delay can cost your institution a fortune.

Don’t start your negotiation in the red zone if you can avoid it.

The Downfalls of Red Zone Negotiating

Unfortunately, many bankers are wedged between a rock and a hard place. They don’t have the time or resources to proactively engage core legacy providers and fintech vendors in contract negotiations. Instead, they’re forced into a reactionary mindset in which they reluctantly or unwittingly agree to one-sided agreements with predatory terms and sky-high pricing.

Let’s walk through what happens when you negotiate in the Red Zone.

Without leverage, suppliers can slip in pricing structures well above fair market rates. When we sit down with clients, pricing is often the first area they ask about. Well, we dug into our database and determined that 8 out of 10 contracts were between 13-43% above fair market value before we joined the negotiation.

Meanwhile, the typical banker will push for a 5-10% pricing concession — when they could often push for a much larger percentage.

Smaller financial institutions forfeit control over their data when they allow their core banking providers to slide exclusivity clauses into their IT agreements. Exclusivity clauses unfairly empower vendors with the ability to determine how your business pursues, engages, and receives technology services.

They make bankers jump through a circus of hoops to access their own data.

Don’t let your suppliers pull the wool over your eyes and make ludicrous profits off of an unfair deal.

Now you know when to use your leverage and the dangers of letting it swing to your vendor’s side, here’s how to use it.

First, your supplier’s capabilities should align with your bank’s strategy and growth plan. If they don’t, you shouldn’t do business with that supplier. It’s that simple.

Next, whether you’re sitting down with a new vendor or renegotiating an existing deal, your agreement should be written from your institution’s point of view. In other words, every aspect of the contract should favor you, not the vendor. You’re receiving a service, after all. You’re the customer, and you shouldn’t be penalized for that.

Everything from pricing, service levels, legal covenants, and rights of termination should favor your institution. In addition, all of your agreements should be coterminous, meaning they each expire on the same date. After your vendor sells you your main contract, they will often come back and attempt to up-sell and cross-sell different services with varying terms. This is a common and a deceptive tactic. 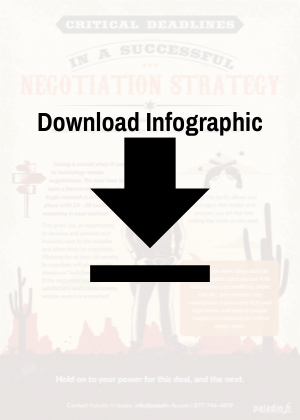 Legacy core IT providers and vendors intentionally stagger various contract maturities to reduce your negotiating leverage. It’s much harder to push back on unfavorable terms or exit an agreement if your ancillary contracts have scattered maturities over the next few years. You’re stuck.

When you sit down with your supplier, demand that your services are coterminous — no matter what phase of the process you’re in. This protects your leverage and ensures you can seamlessly exit a bad arrangement under your own volition.

Call in the Cavalry

Core IT contracts are dense, jargon-stuffed documents that take months to hammer out. Unfortunately, bankers of community institutions must wear several hats and are charged with digging through these agreements while simultaneously handling their usual day-to-day responsibilities. On top of that, most institutions — regardless of size — lack the necessary data points to push for the right terms and pricing.

When you negotiate without data, you’re guessing. That’s how institutions wind up with agreements that have predatory terms and pricing structures that are 43% above fair market rates.

If you want to win your next negotiation, call in the calvary.

Paladin fs has helped over 200 community banks and credit unions secure the best contract terms, whether it’s with a new fintech supplier or a legacy core provider. We have a team of industry veterans with decades of negotiating experience. On top of that, we’ve accumulated a robust database of market intelligence based on thousands of previous deals.

That’s how our clients save about $1.4 million on average when we help negotiate their contracts.

Are you next?  Connect with us if you’re ready to call in the cavalry.