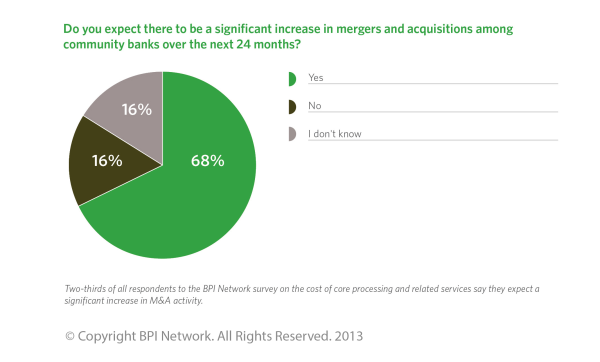 For an institution implementing a future merger strategy, what would another $250,000+ per year in additional profit mean (without having to make a single loan)?

The Business Performance & Innovation (BPI) Network created quite a brouhaha releasing a new and unique study in May called the Less Burn, More Return (LBMR) that looks at the issues and priorities facing today’s community banks during a period of prolonged low interest margins, increased regulatory pressure and sluggish economic growth.  While the study touches many different aspects of current industry business problems, it looks closely at one key area of non-interest expense (NIE) – spending on core bank processing and related IT outsourcing services.  The study uncovers a major opportunity for improved efficiency ratios, profitability and franchise value.  One California CEO quoted in the study completed a merger just a few months after restructuring a new 7 years deal with their core vendor that in turn added more than 7% to the merger deal for his shareholders.  The data used to validate the BPI Network study was collected from surveys conducted with over 10,000 senior executives from banks and credit unions with less than $5 Billion in assets.  Interviews and testimony from CEOs, CFOs, investors, and advisors are peppered throughout the 24-page report further standing up BPI’s claims and data sources.  The report can be downloaded for free at bpinetwork.org – just look for the Less Burn, More Return program link.

RFP’s are D-E-A-D: The Rise of The Smart Vendor Selection Alternative

More than ever in the history of American banking, bankers are looking for sensible costs of doing business. They want to pay a fair price to attract and retain solid core clients.